The Phillies Ryan Howard is ask for 18 million in arbitration. He’s asking for 8 million more 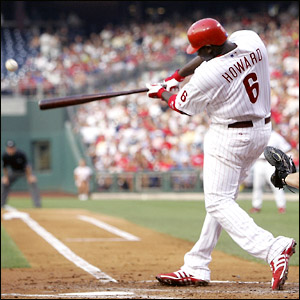 than what he got from arbitration last year. I’m actually shocked that the Phillies haven’t locked him up with a long contract by now. I belive arbitration does nothing but create bad feelings between the team and player. The players go in there talking about all the good things they do and their stats. Then the team goes in there basicly putting the player down and pointing out all the bad things they do. Just to win the arbitration. Just sounds like a lose situation on both parts. How can you want to play for a team that is trying to point out all the bad stuff you do.

In Howard’s situation the team will be talking about how many times this guy strikes out. If Howard doesn’t sign a long term contract with the Phillies he will have to go through arbitration again. He is not eligable for free agency until after the 2011 season.