Heyyyy fellow bloggers. Just wanted to keep you guys updated on Edgar Renteria. I got some good news for those of you out there that care. Renteria hasn’t done anything on the field for the Giants yet, but did try on 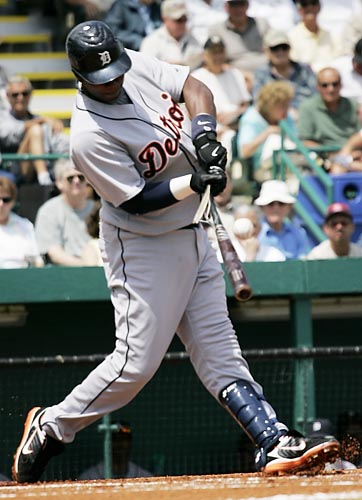 some uniform pants. Then a reporter asked him about his weight. He said he did lose at least 10 pounds. He then tugged at the waist of his pants to show off the two to three inches of excess room. Renteria then said “You can tell.” That shows that Renteria took his off-season seriously to get himself in good shape again. Giants fans would love to see Renteria get his bat back to his 2007 season with the Braves when he hit .332 with the Braves.
Jim Leyland the Tigers manager thinks Renteria will be a good player for the Giants. Bruce Bochy has studied videotape of Renteria and doesn’t have any concerns. Renteria still thinks he can play. He said “I always say that if one day I wake up and I feel like I can’t play anymore, I’ll quit, no matter how much money I’m making.”
We all know he’s no Omar Vizquel, but we don’t need him to fill those shoes. We just need him to make the plays he should make. We signed him to be an offense upgrade at the shortstop position. I’m sure Edgar will do his job 2nd in the lineup. He can move runners over and he will get on base for Sandoval and Molina.
Today in Baseball History – February 18th
1999 – The Blue Jays trade Roger Clemens to the Yankees for David Wells, Graeme Lloyd, and Homer Bush.
~King of Cali