inning to make it 7-5 Nationals. Bengie Molina hit a solo home run in the bottom of the 8th to make it 7-6 Nationals. Then the Giants come up in the bottom of the 9th inning down by 1 run. Joe Beimel got the first 2 Giants players out. He just couldn’t get the last out to end the game. Emmanuel Burriss hit a single to centerfield. Then Beimel tried to pick him off at first and threw the ball away, so the tying run is now at 2nd base. Edgar Renteria steps to the plate, and he’s been clutch with guys on base or when the Giants need a big him. Renteria ended up walking to set up 1st and 2nd for Pablo Sandoval. Beimel did have 2 strikes on Sandoval and then Pablo got a pitch that he liked and hit a line drive home run over the left field walk for a walk off 3 run home run! Giants win 9-7… All that started with 2 outs in the bottom of the 9th. The Giants are finding ways to win. They haven’t lost a series in 9 straight series. They have either split or won the series.
~ King of Cali
Giants fans couldn’t have asked for a better weekend in Los Angeles. Well we could have took some brooms to Dodgers stadium, but were happy with winning 2 games and taking the series. Barry Zito finally got a win and had another nice outing. He’s pitched 4 good games in a row. This is the Zito that the Giants thought they signed.
The Giants still are trying to do whatever they can to get a run. They are probably the best team in baseball at getting bases loaded and finding a way to at least scrape 1 run across. lol Although yesterday Randy Winn did get a double to give the Giants the 7-5 lead in the top of the 13th.
Emmanuel Burris is very hotttttt right now. This guy started the season off in a very big slump. He was batting .161 and then has been on a tear in the past 10 games. He has had multiple hits in 8 out of the last 10 games. His AVG is now .287, and hopefully he keeps the hot swing going.
Side Notes
Brian Wilson struck out Casey Blake friday night with bases loaded. Then Sunday Blake hits a home run to tie the game in the bottom of the 12th off of Wilson. Blake then sat in the Dodgers dugout and mocked Wilson’s religious cross-arm gesture. Wilson and the rest of the Giants are now heated. Giants will not face the Dodgers again until August. 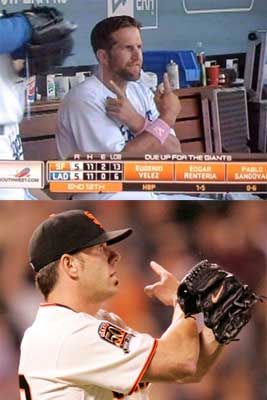 Up Next
Randy Johnson gets the start tonight against the Washington Nationals. Johnson is looking for win #298. Johnson is also coming off a bad outing in Colorado, so he’s due to pitch a gem today. He’s been outstanding at AT&T Park this year, and also has pitched really well every other game. Which means my money is on a gem from Johnson tonight. Go Giants!
~ King of Cali
http://twitter.com/kingcali
Game 2 of the 2 game series is a must win for the Giants. They need the split to head into Los Angeles on a high note. Plus just to stay at 6/5 games back from the Dodgers. The Giants have started the game off with some runs. The Giants already have a 5 run lead going into the top of the 4th inning. Bengie Molina already has 2 home runs. The Rockies finally got their first hit off of Cain in the bottom of the 4th.
The Giants get on the board again in the top of the 5th inning. Fred Lewis hit a RBI single up the middle to score Nate Schierholtz. The Giants bring in Eugenio Velez to pinch run for Matt Cain, so his day is over after 6 innings of no runs and 1 hit ball. He did walk 5 runners though but did manage to strike out 7.
The Rockies get on a scoreboard in the bottom of the 7th inning. Brad Hawpe hits a solo home run off of Jeremy Affeldt. That’s all the Rockies would get in the 7th inning. Randy Winn got a RBI single in the top of the 9th to score Pablo Sandoval. The Rockies get 2 runs on a 2 run home run by Ian Stewart in the bottom of the 9th. That was off of Justin Miller. The Giants still hold on to win the game by a score of 8-3 over the Rockies.
Matt Cain is the winning pitcher and is now 3-1 this season.
Up Next
The Giants start a weekend series with the Dodgers. Barry Zito gets the start for the Giants. Giants fans are hoping he can keep his starts going against the Manny-Less Dodgers. Manny Ramirez who’s on a 50 game suspension will not be eligible to play again until July 3rd.
~ King of Cali
http://twitter.com/kingcali
Randy Johnson has a trend going on. He has a great outing then a bad one. It’s been like that since the start of the season. He has been pitching really well at home, so good news Giants fans. Johnson’s next 2 starts will be at home. =)
You would think that playing in Colorado would jump start a teams offense. Not for the Giants! They can’t even score runs there. They have another game there today, so lets see what happens. We need to win this game to get a 2 game split with the Rockies. The Giants have Matt Cain on the mound.
Up Next
After today’s game the Giants will fly to Los Angeles to face the Manny-less Dodgers. The Giants got a early Christmas gift today. When they woke up to

news saying Manny is suspended for 50 games starting today. This should help the Dodgers come back down to earth after their hotttt start. Man having Manny out is going to really hurt my Fantasy team! =( Oh well as long as my Giants catch up and take the lead in the division. =)
Even Barry Zito has a tweet about Manny. “Manny’s gone for 50 games. Time for the Giants to capitalize.” Zito gets the start tomorrow night against the Dodgers. Go Giants!
Now Manny has more time to party with his fans… lol
~ King of Cali
The Giants start the game off with a bang. Renteria got a bunt single. Then Aurilia got a hit, and then Bengie Molina hit a 3 run home run.
Lincecum doesn’t seem to look like he has his best stuff early on in the game. Derrek Lee hits a double off Lincecum in the bottom of the 2nd inning. The Cubs then got some productive outs to move Lee over and score him. After 2 innings the Giants lead 3-1.
It’s a 3-2 lead for the Giants heading into the top of the 8th. The Cubs still have some good players on the bench. They sat some good players today against Lincecum. Probably figured today is a good day to take off instead of getting themselves in a slump against Lincecum. The Giants haven’t got a runner in scoring position since the 2nd inning. The Giants have managed to get bases loaded in the top of the 8th inning with no outs. Aaron Rowand hit a 2 run double. Randy Winn follows up with an RBI single scoring Molina. The Giants end up scoring 3 runs in the top of the 8th. The score is now 6-2 Giants.
The game is over the Giants win 6-2 over the Cubs. The Giants and Cubs split the 2 game series in the Giants only visit to the windy city.
Tim Lincecum is the winning pitcher. Giants are now 13-12 so far in the early season.
Giants are now off to Colorado to face the Rockies. Randy Johnson and Matt Cain will get the next two starts for the Giants.
~ King of Cali

King of Cali
Blog at WordPress.com.