I have never posted a blog about this, but I did go to the Home Run Derby when it was at AT&T Park. I just wish I would have took more pictures. The battery died on the camera so I knew I only had a few pictures in it. It really was a cool experience to see all the booths and stuff they had set up outside of the stadium. Right when I walked in the stadium I went straight to the field. The National League team was having batting practice and the American League team was starting to stretch out in front of me. I got a couple pictures of some of them up close. It was just really cool to see all these players from different teams up close. These players seemed so loose and were just joking around. You knew they were all having a blast. 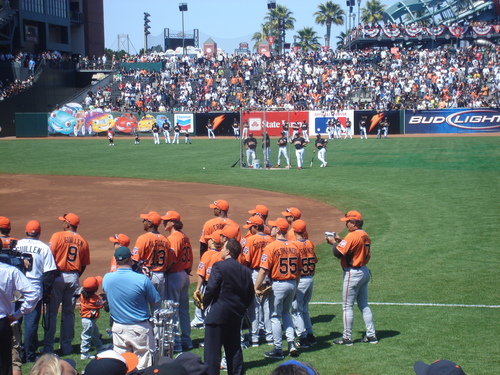 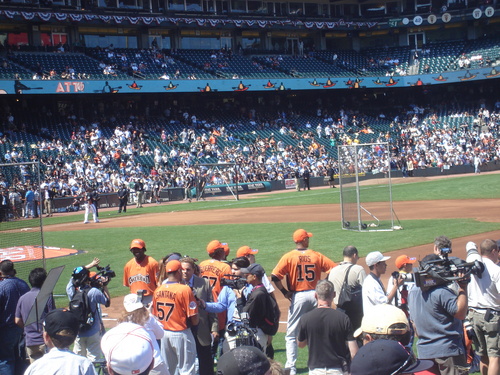 Here is a couple of pictures from my seat view. I never sat this high before but these were the only tickets I could find for the Home Run Derby. 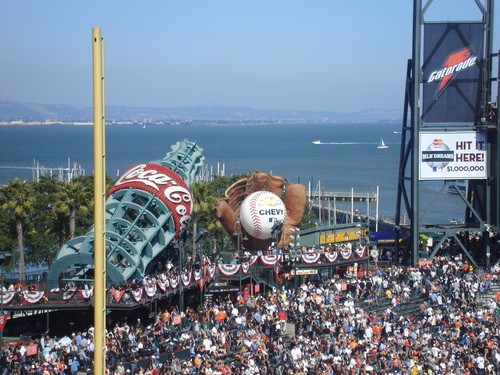 The winner of the 2007 Home Rub Derby was big, bad Vladimir Guerrero from the Los Angeles Angels of Anaheim.

Last Friday I did my 2nd Fantasy Draft. I had the 6th pick in the draft. My #1 pick of the draft was Josh Hamilton. I have never played Fantasy Baseball before so I’m still not to sure how everything works. I know I have two guys on this team that are injured. I decided to get Alex Rodriguez since I figured he would be back in May. I also got Troy Glaus. I had no idea he was injured. I think I seen on MLB. com today that he won’t be back till June. Grrrrrrreat (not Tony The Tiger Grrrrrrreat) now I need to figure something out. lol Well here is my 2nd Fantasy team. Let me know what you think and any suggestions would be nice. =)
Team – King of Cali
C                  Brian McCann
1B                Pablo Sandoval
2B                Howie Kendrick
3B                Alex Rodriguez
SS                 Rafael Furcal
OF                Josh Hamilton
OF                Alfonso Soriano
OF                Corey Hart
Util              Andre Ethier
Util              Jim Thome
BN                Delmon Young
BN                Orlando Hudson
BN                Troy Glaus
BN                Fred Lewis
SP                 Jon Lester
SP                 Matt Cain
RP                George Sherrill
RP                Chad Qualls
P                   John Danks
P                   Ryan Dempster
P                   Jered Weaver
~ King of Cali
Tim Lincecum is scratched from making the start. He has the flu, so Jeremy Affeldt gets the start. He’s not a starting pitcher. He’s going to be a reliever this season for the Giants. Figgins did lead the game off with a hit. Affeldt then struck out Kendrick. The next hitter is Matthews.  Figgins then stole 2nd base and then stole 3rd base. Matthews then walks to make it 1st and 3rd with one out. Torii Hunter then hit a double to get 2 RBI’s. Kendry Morales (who also is on my fantasy team) then hit a double to get an RBI. Juan Rivera grounds out to end the inning. Eugenio Velez starts the Giants first off with a single. Rich Aurilia then walked setting up 1st and 2nd. Bengie Molina then hit a 2 run double. The guys on the radio said if anyone else would have been running for Molina it would have been an in the park home run. Everyone knows Bengie is the slowest guy in baseball. He still did his job driving runs in though. After 1 inning it’s the Angels 3 and the Giants 2. The 2nd inning was 3 up for the Angels and 3 up for the Giants.
No scoring in the 3rd inning for either team. The Angels also didn’t score in the top of the 4th. Nate Schierholtz strikes out swinging but gets to first on the wild pitch. Juan Uribe then gets an RBI double to tie the game at 3. Kevin Frandsen gets a RBI single up the middle to score Juan Uribe. This giving the Giants a 4-3 lead. The Angels answer right back in the top of the 5th by score 2 runs off of Bob Howry. Bengie Molina gets an RBI single in the bottom of the 5th inning to tie the game up at 5. Nothing exciting in the 6th inning offensively for either the Giants or Angels. No runs scored in the 7th inning either.
The Angels take the lead in the top of the 8th inning by scoring 2 runs. Then two wild pitches by Luis Perdomo scores another Angels player giving the Angels a 3 run lead. On Perdomo’s 2nd wild pitch he walked the batter and the batter ran all the way to 2nd base. Perdomo then tried to pick him off and threw it wild again. This allowing the runner to get to 3rd base. The Angels end up with 3 runs in the top of the 8th and the Giants have no answer back this time and go scoreless in the 8th. Now it’s the 9th inning. If we (Giants) were up. I would call this the Nenth inning. I always called it the Nenth inning for Rob Nen. Man this guy was a great Giant closer. Well the game is now over and the Giants wouldn’t get another run. Out of the last 9 Giants to bat there was 5 strike outs.
Angels get 8 runs, 10 hits and 1 error. Giants get 5 runs, 8 hits and 2 errors.
There was only two Giants players with multiple hits. Rich Aurilia went 2-2 with a walk and scored 1 run. Bengie Molina went 2-3 with 3 RBI’s.
Today In Baseball History
After watching Ty Cobb quarrel with a black grounds keeper and with teammate Charlie Schmidt, Tiger manager Hugh Jennings tries to deal him to the Indians for outfielder Elmer Flick. The Tribe’s manager Napoleon Lajoie turns down the deal for the ‘Georgia Peach’.
~ King of Cali
This is just something I have been thinking about and I’m curious as to what other bloggers think about this. If you could start your with one player. Who would be the guy you would build your team around? Would you start off with a young Ace like Tim Lincecum. Somebody that can start every five days and shut the other team down. Maybe you want a star shortstop like Derek Jeter. Someone that can hit and give you a 100% day in and day out. Maybe you want a centerfielder like Aaron Rowand that goes balls out on defense. You can even go with a monster swinger like Ryan Howard. He can spark your offense and get a ton of RBI’s. There is so many ways you can go with this. I’m just curious to see what bloggers would go with what guys to start a team and build around them. I look forward to your comments.
~King of Cali
Quick Thoughts on Dave Roberts and A-Rod update
Today the Giants made their first big roster move. The Giants have released Dave Roberts. I have mixed feelings about the move. I like Dave Roberts as a 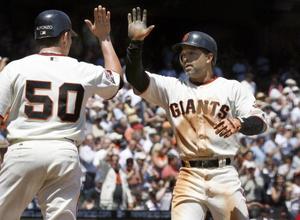 person and how he is a good leader in the clubhouse, but he’s just been taking up a roster space. He’s always hurt and hasn’t been the player the Giants thought they had. He was released today, since it’s still early in spring training. This is so another team can still pick him up. The Giants will have to pay his $6.5 million for this season, but any team that picks him up only has to pay the league minimum, which is $400,000. I hope a team picks him up, cause I would hate to see his career end like this.
Update– A-Rod is not going to have surgery. He’s going to try to play this season and hope he can wait till the end of this season to have surgery.
~King of Cali
It’s finally over. Manny is going to be a Dodger. I’m sure most of us already knew that’s where he would end up. The Dodgers couldn’t afford to lose Manny. Manny did sign a 2 year contract but can opt out of it and become a

free agent after 1 year. This does make the Dodgers the favorite to win the NL West, but I wouldn’t say it’s going to be easy for them. They still don’t have the starting rotation that is going to blow teams away. They do need to score some runs to win some games, but they do have some good bats in their lineup.
I honestly think the Giants never wanted to sign Manny. Yeah if he fell on their lap they would have done it. The Giants feel good with what they have going into this season. I think some of the best moves the Giants made this season were the moves they didn’t make. I don’t mean Manny either. That would have been a great move. I think not signing Joe Crede was a good move. This means Pablo Sandoval would play 3rd base, and Travis Ishikawa would get his chance to play 1st base. Ishikawa has had a very nice start this spring training. He’s hitting .400 with 2 home runs and 4 RBI’s in 5 games.
Giants vs. Dodgers 12:05 pacific time.
~King of Cali

Manny and Ned working on a contract.

Manny update – Scott Boras said Manny would except the Dodgers offer if they paid the contract and not defer money over a period of time. Sounds like this deal will be worked out soon. Manny is going to be a Dodger.

King of Cali
Blog at WordPress.com.